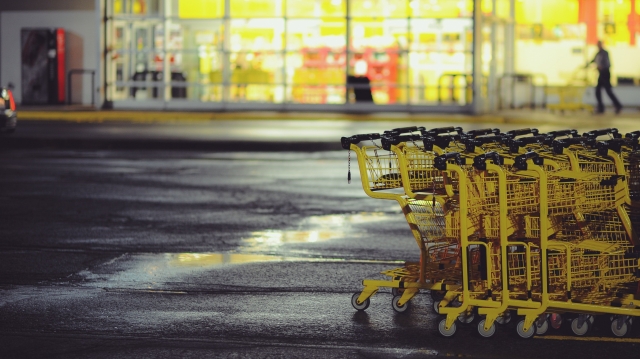 I like to think when I walk into a retail store that I’m going to walk in, stride over to what I need, check out, and go home.

Rarely does it go that smoothly.

Retail stores know how to entice. Their shelves and displays, with their temptations, sale signs, and ever-changing inventory, pull me in and before I know it, I’m in a shopper’s daze.

Costco is fiercely adept at this retail game: they constantly move products around; provide no signage, forcing wayward wandering; go big on seasonal displays; and eliminate products with enough randomness to suggest the idea of future scarcity.  Must. Buy. Now.

One day, before we knew each other, Bubba got home from a Costco-run with golf clubs in his car. He didn’t play golf. Didn’t belong to a golf club. But those golf clubs triggered some aspirational goal. Yeah, he could do business on the links; business development; yeah, sure. Into the cart they went.

By the time he got them home, the aspiration had vanished. He stuck the clubs back in the car and returned them.  Impulsive Costco purchases are fostered by their very generous return policy.

Another time Bubba’s aspiration vanished before he left the store. He doesn’t even remember what the item was; he just remembers sheepishly going straight from the checkout to the return counter.

The return guy asked if there was anything wrong with it. “Nope,” Bubba said. “I just realized I didn’t need it. Costco-daze.”

“It’s not the first,” the Costco guy replied.

It was reassuring to know.

The Costco-daze is such a familiar phenomenon that we joke about coming home with a kayak or tent along with the broccoli and bananas because, well, hey, you never know. And, in truth, we’re never really quite sure it is a joke when the other person says it. The fire pit in the back yard and a canopy in the garage remind us of that.

We’ve tried to use shopping at Costco as a place to practice mindfulness. Pretty advanced-level spiritual retreat.

Sometimes Bubba goes in and pretends he’s at a museum and wanders around seeing what new items have been curated for his enjoyment.  As a museum, it’s all about looking, not acquiring.

We’ve also practiced “catch and release” shopping, carting things around for a while before “coming to” and returning the thing to the shelf.  This is a form of half-awake mindfulness; I take credit for any item not in my basket at check-out that had been there earlier.

Most of the time, despite my best efforts to come out of Costco with only the items on my list, I come out with bunches of other things. Some items I can vaguely rationalize. But lots of things are spur-of-the-moment purchases Costco’s profits thrive on.  Did I really need that string of outside lights? And where am I supposed to plant the damn shrub?

These unplanned purchases still surprise me; why, I don’t know, given how regularly they happen. And they definitely make me wonder who the ‘eff is in charge while I’m wandering around the Costco aisles, shopping list in hand.

I asked a friend if she shopped at Costco.

“Nope,” she said. “Because when I go there, I leave with all sorts of things I didn’t know I needed.”

That about sums it up.