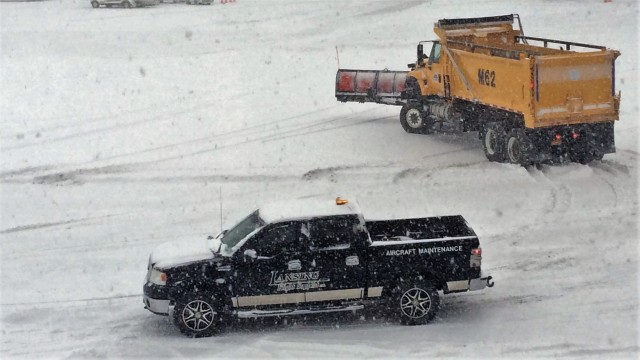 My blogging efforts remind me of learning to drive a stick-shift: fits-and-starts. In January, I met my goal of posting three-times a week. So far this month? Sketchy.

My excuse? I went east to spend time with dad, to celebrate his 95th birthday. Generally I avoid flying cross-country during winter; too unpredictable. I haven’t been home for Christmas in decades. I tried to get east for dad’s 90th birthday, but snow-storms cancelled that year’s trip.  With mom’s death last September, the urge to go east for Christmas or for dad’s February birthday was strong.

I opted for dad’s birthday, both to miss the holiday madness, and so I could get information together for his tax return. Dad might discourage my traveling for his birthday; but to get the taxes done would be a compelling enticement.

Whether I was going to get east seemed dicey.

My flight was booked to go through Chicago, where the polar vortex was making news days before my scheduled trip.  Even as I headed to the San Francisco airport, the west coast was getting hammered by rains and high winds, and United airlines was sending out text messages inviting us to reschedule our flights without incurring a change fee.

“Great,” my cynical character thought, “they’re asking us to do them a favor and they won’t charge us for it. How nice of them.”

Luck was with me; all flights were go. I arrived in NY as scheduled.

I’ve become a California wuss, finding temps below 50-degrees cold. I moved west, while the rest of my family stayed in the Northeast: rugged, wood-splitting, snow-blowing, cold-handling, rural-residing toughies. I don’t even get myself to the Sierras in the winter, so it’s been years since I’ve experienced biting cold, snow and ice.  I fretted over having to drive in it.

The trip between the airport and the house includes winding, rural stretches, with no houses and little traffic. It’s bucolic in the summer; intimidating in a snowstorm.

I rented a 4-wheel Jeep.  Upon leaving the airport, the roads were dry but bordered by previously plowed snow, a reminder this was a place where snow fell and cold lingered. Minutes out of the rental lot, the low-tire warning came on: 14-pounds in the right rear tire, versus 36-pounds in the rest. I looped back to Budget; they sent me to their maintenance yard, where a bundled-up guy trundled out and got the tire back to 36.

I pulled away, a niggling voice in my head fretting about only 14-pounds of air in the tire. But I had already delayed leaving the airport once when I swapped a larger Jeep for this smaller one, a decision made after I described the large Jeep to dad who said it wouldn’t fit in the garage. I didn’t want to spend more time trying to do a second swap, nor was I sure Budget had another 4-wheel drive available.  I quieted the voice, kept an eye on the tire pressure, and headed out.

It was mid-day, traffic was flowing, the roads were dry, and the tire pressure held. I made good time to the house. The Jeep fit in the garage, where I figured it would sit most of my stay. Any trips we had, we’d use dad’s car.

Visiting dad is a balance between getting stuff done and just hanging with him.  I often tilt toward wanting to be productive, at the expense of just hanging. I was advised by my brother’s girlfriend—who had recently faced a similar scenario with her mom—that just hanging has a lot to be said for it. Stuff, she reminded me, will always be there. A 95-year-old parent won’t.

I tried to remember.

During one stretch of getting stuff done—shoveling wet snow that had fallen off the roof, digging out a drainage ditch, sweeping water out of the garage—I checked the right, rear tire of my Jeep: flat.

Dad and I pumped it up. While screwing the valve cap back on, I heard air. “That’s not good,” dad said. I leaned in, felt around, and found it: a nail embedded in the tread.

I could write a whole blog post about the nail, the tire, phone calls to Budget, getting it fixed, worries around it, regret over ignoring that earlier, niggling voice. But the gist of it is this: I was safe and warm; I had alternate transportation; we ultimately got the tire fixed at a local car dealership; and Budget paid for it. I’m glad the Jeep didn’t go to someone else, who might have found themselves stuck on the side of a cold, rural, wintry road, navigating a flat tire in the dark with no cell reception.

Dad and I hung out, shared meals, got things done, did errands, and had a lovely family celebration of his birthday. I played in the snow and took lots of pictures with his camera, blown away by the power of his zoom. I forgot what a real camera can do in the picture-taking department.

As the day of departure got closer, weather warnings on the radio became pronounced. Dad, always my weather guy, followed the reports, not just on the east coast, but also in the San Francisco Bay Area. It was gnarly everywhere.

Given the forecast, dad and I agreed I should leave a day early. United allowed me to change flights without a change fee because of the weather; this time my inner voice expressed gratitude for their offer.

But suddenly, I had unfinished things that needed to get crammed into one day instead of two.

I was focused on my to do list that last day when dad got a call from the pastor who was helping us plan mom’s Celebration of Life ceremony. He could meet with us that day; would that work? It wasn’t on my list. My first, default reaction was to say no.

But something kicked in; woke me up.  I had an inner knowing that this meeting needed to happen. Dad had talked about our meeting with the pastor before I arrived, and he hadn’t been available until today. I felt the inner shift. “Yes,” I said to dad. “Yes, today works.”

I’m frequently aware of moments when I botch something; The Judge is quick to step in to ensure I know. This was the opposite; a moment I knew my decision was right. Being awake to that—seeing no critical judge appear—felt like a gold star of awareness.

The day I left the skies were clear; the roads dry. My 4-wheel Jeep didn’t get to strut its stuff, other than on one short stretch of icy dirt road that led from dad’s house. I switched the 4-wheel drive on and drove the 20-yards, not because it was warranted, but because the car had the dang feature, and I wanted to use it.

By the time I walked out of the rental garage toward the airport terminal, it had started to snow. Approaching my gate, I could see snow accumulating on the tarmac; visibility was low. A truck with a plow shoved snow before it. The promised storm had arrived. It would slow me down and delay things, but it didn’t stop me. Twenty-two hours after I left dad’s house, I successfully arrived home. To a warm, Bubba welcome. 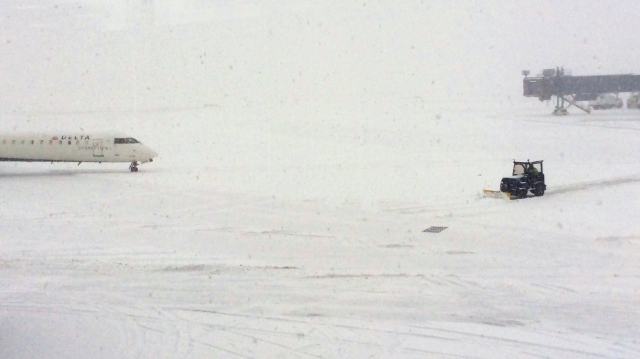