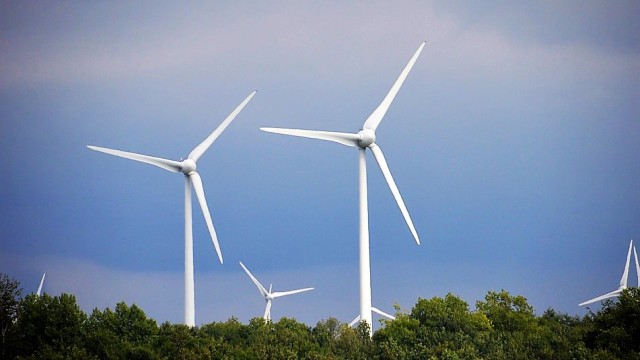 I love moments when I see my perspective shift on something.  I tilt my psychological head and, bam! things are suddenly different.

I was driving to the hospital to see mom. The Vermont hills, peppered with farms and cows, rolled before me, small towns and communities rising up and fading away.  The green scenery swaddled me in its splendor; an occasional tree hinted at autumn.

I rounded a turn. There on the hill before me was a display of a half-dozen windmills.

They claimed the ridge line like a crown on a queen’s head, their white towers and blades contrasting against the leafy green of the trees they towered over.

Yet I was simultaneously aware another character had some reservations about the turbines.

“These things are HUGE! They’re behemoths! They overshadow the hills they sit on and look completely out of scale,” it said.

I suddenly felt confused. Are windmills good or bad? Wind power is clean, so it’s good, right? But wind turbines kill birds, so that makes them bad. Then again, they’re elegant in their design, which is good. But they really can overwhelm hillsides and that can be bad. But then, they’re not oil. That alone makes them good, right?

What did I think about them?  I was surprised at my waffling; my uncertainty.

Then I experienced my head tilt moment; my perspective shift; sudden clarity: what if it had been oil derricks on that hill?

And I knew, instantly, that I would have been offended by them. I would have known—with that complete assurance one feels in their bones (even though that still doesn’t make it true)—that I would have disapproved of oil derricks perched on pristine Vermont hilltops.

Had they been oil derricks, my negative reaction to them would have been instantaneous and unquestioning.  Even if they had been smaller or blended in better. No waffling. No uncertainty. Oil Derricks? Oh, yuck.

Yes, even as I drove my combustion-engine car, I knew only one character would have come out to comment had they been oil derricks: The Judge, with her singular, disapproving opinion, delivered from “the gut.”

Thank goodness they were windmills; they gave my characters a chance to tilt.

16 thoughts on “Tilting at Windmills”